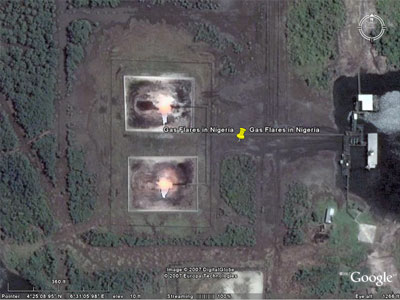 Every year, millions of dollars are literally going up in smoke in Nigeria, Africa’s top crude oil-exporting nation, as companies burn off unwanted natural gas released during oil production.

This flaring and venting produces more greenhouse-gas emissions than any other single source in Africa south of the Sahara, and many who live in Nigeria’s oil-producing communities complain of chronic health and environmental problems associated with the gas flares.

Photo by: Michael Kamber for NYTimes

From Strangers in the Dazzling Night: A Mix of Oil and Misery – NYTimes 2005

The gas is a highly valuable product used to fuel industry across the power-hungry globe, and Nigeria has more than 600 trillion cubic feet of it, one of the largest reserves in the world. If harnessed and put to use, experts say, Nigerian gas could light the whole continent for the better part of a millennium.

But for decades there has been no way to capture it because oil companies and the Nigerian government, a majority partner in all oil operations here, had not built the infrastructure to make use of it. The market for natural gas inside Nigeria is tiny, and exporting it requires pipelines and other infrastructure that cost billions of dollars to build.

So sad given today’s article in the Times.
Toiling in the Dark: Africaâ€™s Power Crisis

Perhaps 25 of the 44 sub-Saharan nations face crippling electricity shortages, a power crisis that some experts call unprecedented.
…
The implications go beyond candlelight suppers and extra blankets on beds. The lack of reliable power has already begun to hamper the regionâ€™s development, clipping more than 2 percent off the annual growth rates of the worst-hit African economies, according to the World Bank. Some nations, like Ghana, have tried to deal with their power crises by leasing huge teams of gas generators, producing emergency power at exorbitant rates until power plants can be built.

Amsterdam, 3 May 2007 — On the day that oil giant Shell’s quarterly earnings report is made public, Milieudefensie (Friends of the Earth Netherlands) will light a 15-metre high flare in front of the headquarters of Shell in The Hague, the Netherlands. With this action, Milieudefensie is protesting the gas flaring in Nigeria. Milieudefensie calls on Shell to immediately heed the court order to stop gas flaring in Nigeria by 30 April 2007. Three days ago this deadline expired and the flares are still burning.